City of Arts and Sciences I

The City of Arts and Sciences

in Valencia is a unique complex devoted to scientific and cultural dissemination which is made up of five main elements: the Hemisfèric, finished in 1995 (IMAX cinema and digital projections), the Umbracle (a landscaped vantage point and car park), the Príncipe Felipe Science Museum (an innovative centre of interactive science), the Oceanográfico (the largest aquarium in Europe with over 500 marine species) and the Palau de les Arts Reina Sofía, (which takes care of the operatic programme). T

he Ágora gives the complex a multifunctional space. Along an axis of just under two kilometres that was formerly the bed of the River Turia, this complex promoted by the Generalitat Valenciana has striking and futuristical architecture, designed by Santiago Calatrava and Félix Candela – and an endless capacity for entertaining and stimulating the minds of its visitors. In its various buildings they can get to know different aspects of science, technology, nature, and art.

Wikipedia: The City of Arts and Sciences (Valencian: Ciutat de les Arts i les Ciències [siwˈtad de les ˈaɾts i les siˈɛnsi.es]; Spanish: Ciudad de las Artes y las Ciencias [θjuˈðað de las ˈartes i las ˈθjenθjas]) is a cultural and architectural complex in the city of Valencia, Spain. It is the most important modern tourist destination in the city of Valencia and one of the 12 Treasures of Spain.

The City of Arts and Sciences is situated at the end of the former riverbed of the river Turia, which was drained and rerouted after a catastrophic flood in 1957. The old riverbed was turned into a picturesque sunken park.

Designed by Santiago Calatrava and Félix Candela, the project began the first stages of construction in July 1996, and was inaugurated on 16 April 1998 with the opening of L’Hemisfèric. The last major component of the City of Arts and Sciences, Palau de les Arts Reina Sofia, was inaugurated on 9 October 2005, Valencian Community Day. 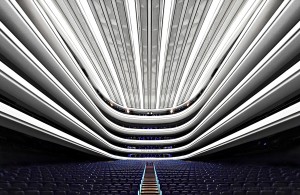